Most people are unaware that Holmes was also modeled partly after two earlier detectives, Edgar Allan Poe’s C. Auguste Dupin and Émile Gaboriau’s Monsieur Lecoq. Still, because of Holmes’ systematic and deliberate use of scientific methods, most detectives that follow him at least bear some similarities.

As far as I am aware, all of the Byomkesh Bakshi stories are original. Therefore, I have no reason to doubt that Saradindu carefully crafted each storyline based on his own constructed plots. In fact, I actually prefer some of Byomkesh’s investigations.

Also, during his literary career, Saradindu himself drifted from his original style. His earliest Byomkesh stories are written in a formal first-person style with Ajit narrating, while his later works are more literary, free-flowing in third-person narrative. During the course of his detective career, Byomkesh gets married to Satyabati, and has a son. On the other hand, Sherlock Holmes and his chronicler Dr. John Watson are essentially unchanged during the decades they work together (even though we know that Watson was married). 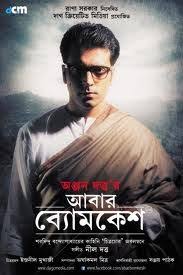 Still, if we want to search for similarities between the two great detectives we should start at the very beginning. The earliest Byomkesh Bakshi stories have some superficial resemblances to the Sherlock Holmes stories. In fact, Pother Kanta, the first story featuring Byomkesh was written close to twenty years after Holmes’ final case.

One Reply to “ Byomkesh Bakshi or Sherlock Holmes”